Office of the eSafety Commissioner

Early Childhood Education (ECEC) and Care in the Digital World
Aims to support OECD member countries and jurisdictions to better understand the implications of digitalisation for ECEC.

Office of the eSafety Commissioner grant 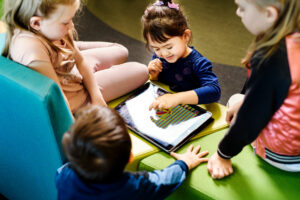 Digital Child researchers are leading an Australian-first study to teach young children, including those aged three to four, about digital citizenship.

The trial involves pre-schools and kindergartens as well as 15 primary schools from remote, rural, and metropolitan regions across Australia from Prep to Year 6.

Professor Dezuanni says lessons about digital citizenship for young children are being developed using the principles of play-based learning that’s appropriate for pre-school and kindergarten settings.

“Even very young children now use digital devices daily so it’s crucial we teach children about good digital citizenship from the earlier years of their education,” Professor Dezuanni said.

“We need to introduce young children to critical reflection about their technology use in ways that are engaging and fun.”

Additional expertise to create the pre-school and kindergarten curriculum will be drawn from Associate Investigator Professor Susan Edwards from Australian Catholic University, who is a world-leader in play-based education and technology education.

Students from primary schools, participating in the trial, will be taught more advanced concepts as they move up through year levels.

Professor Dezuanni said the primary-school program was based on one of the world’s leading digital citizenship curriculums, developed by US-based Common Sense Media in partnership with Harvard university experts.

He said the trial will evaluate the effectiveness of Common Sense Media’s Digital Citizenship approach in an Australian context.

To date, there is no research-approved digital curriculum being taught in Australian schools.

The trial involves a partnership with Evolve Education to deliver teacher professional development and support for schools to implement the curriculum during the trial.

“Evolve Education are thrilled to be working with QUT and Common Sense Media to empower students across Australia with the strategies to stay safe online, build critical literacy skills and take charge of their digital wellbeing,” co-founder of Evolve Education Steve Villani said.

“Common Sense Education is committed to supporting students, educators, and schools in Australia to build a positive culture of digital citizenship,” she said.

The project has been allocated $544,400 in funding that will run for one year.