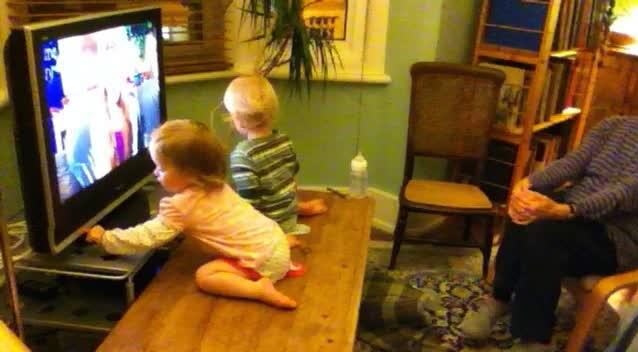 Getting reactions from babies and toddlers is an instinctive urge: we tend to smile and make encouraging expressions and gestures in the hope of stimulating a positive response. And we like to see lively behaviour in older children such as laughter, shouting or running around as evidence that they are enjoying experiences that we have provided for them: often summed up as “having fun”.

It’s not surprising therefore that seeing a baby or toddler just staring raptly at a screen can generate anxiety in adult observers and can give rise to amateur diagnoses such as “obsession” or “hypnosis”; or it may simply be described as “passive viewing”. While academic researchers on children and digital media don’t use those two quasi-medical terms, the notion that watching moving-image media (which is what babies and toddlers are more likely to be using screens for, than engaging with apps or games) is often seen as “passive viewing”. This term certainly does appear in some of the academic literature.  It’s connected to the assumption that parents only ever place their children in front of screens because they’ll be kept quiet by the allegedly mesmeric effects of digital products, thus enabling adults to get on with domestic tasks.  Scholars interested in the passive viewing concept also tend to use the term “exposure” rather than “watching” or “viewing”, implying a complete denial of any process of interpretation being at work: an extreme version of the widespread and simplistic notion that the meanings of moving image media are accessible to everyone and do not require any process of interpretation. “Exposure” also carries strong connotations of risk, as in “dying of exposure”.

At a more subtle level, scholars sometimes implicitly condemn “passive viewing” when enthusiastically citing “having fun” types of behaviour as evidence of active engagement. In their 2018 study of parents’ confusion and anxiety about the American Association of Pediatrics’ guidelines on how much “screen time” their children should have.1 Blum-Ross and Livingstone rightly call for “a more nuanced conversation” about children and screen media, but merely cite the relatively rare phenomenon of “children’s pleasure in singing and dancing along with a video, or enacting the drama on the screen also with their siblings in front of it”2 to support their argument against arbitrary limitations on TV-watching. In their more general discussion of digitally networked spaces for 0–3-year-olds, Flewitt and Clark celebrate “young children’s creative, collaborative, inquisitive and playful meaning making across multiple modes and media”.3  What is being asserted, and indeed celebrated in both these cases, is behaviour that is easily observable, and is not very difficult to interpret: having fun, in other words.

But what about babies’ and toddlers’ rapt staring? What kinds of observation and interpretation might enable us to see it as anything other than “passive viewing”?  Some scholars may use this label because they know little about the codes and conventions of the cultural forms that the toddlers are staring at. Moving image media products for kids (I’ll call them “movies”, but they’d include some apps, as well as YouTube videos and TV programmes), are likely to be using at least basic devices such as cutaways to close-up, eyeline matches and reaction shots, whose meaning may not be immediately obvious to a baby or toddler encountering them for the first time. If a movie interests her but she remains puzzled by some of it, she’s likely to want to watch it again, perhaps several times. Parents tend to refer to this as “loving it” (when they don’t call it “addicted to it”), and when she stops re-watching it, they’ll say “she got bored with it”. In my research on my twin grandchildren4 my daughter suggested “she’s used it up” as a more accurate comment. Careful observation may reveal that the next movie the child gets interested in (this is more likely for toddlers than for babies) may present a bit more of a challenge: dialogue, for example, changes of scene, a longer narrative. I don’t think it’s possible to deny that a learning process is going on here.

When I started studying my 22-month-old grandchildren I thought I would be able to identify direct evidence of this learning. But of course this is very difficult with pre-verbal children (as often happens with twins, their verbal fluency took longer to develop). When I watched the first few videos I’d made of their viewing practices, I was perplexed: all I could see was just “kids watching TV” and sitting still, preferably with their faces close to the screen.  Eventually a colleague suggested that I might want to consider embodied cognition as a way into my data analysis. Soon I was buried in Coëgnarts and Kravanja’s Cinema and Embodied Cognition5, homing in on Chattah on music, Ward on sound design and Wojciechowski on diakresis (selective viewing) who all focus on the ways in which filmmakers can stimulate our emotional responses. In parallel, I was reading Panksepp’s explanation of how emotions and the motor system are linked, drawing on evolutionary theories as well as neuroscience, in his book Affective Neuroscience6. This eventually led me to the work by Gallese and others on mirror neurons and their significance7, not only in humans’ social behaviour but in responses to art works and other cultural phenomena. These texts and many others in linked fields helped me to watch my raptly staring toddlers with greater attention over my 20 months of home-based study.

Unobtrusively videoing the children as they watched movies and then analysing them in minute detail enabled me to spot the tiny, subtle bodily features of expression, posture and movement that gave clues to their emotional states and responses. For example, watching – and even trying to imitate – the bodily tension, hand grips and breathing rates involved when a child is standing completely still and watching intently for maybe six or seven minutes, made me understand just how much energy a child must be deliberately investing in something they really want to concentrate on. I discovered little events such as the shadow that betrayed Connie chewing her cheek in tense anticipation of a Peppa Pig episode that had already upset her during the five times that she’d already watched it, but that she was determined to see again anyway; the tiny rim of tears around Alfie’s eye as he got ready for the familiar sad ending of Baboon on the Moon; the twitch of Connie’s hand when she suddenly saw an unfamiliar gesture on screen.

We know that toddlers are engaged in massive learning challenges: becoming fluent in one or more languages; understanding the social and cultural conventions of their families and friends; finding out how things work: puzzles and toys of course, and lipsticks or kitchen knives if they get the chance. They would not be wasting time being “mesmerised” by movies. Their movie-learning is self-driven, which can compel them to be still and intent. They may also learn from co-viewing: overhearing others’ comments, noticing the body language, wondering what they mean, and demanding to see the movie again.

One of the factors that drove my interest in doing this research was hearing about teachers’ amazed responses when they first try showing and discussing movies in primary classrooms: they imply that they didn’t know how smart their pupils were. What I was interested to find out was what prior “movie-learning” five-year-olds bring into school, that the school then fails to recognise and build on. My book sets out to demonstrate that if we were to regard babies’ and toddlers’ movie-watching as a learning process, we would not only be affording them a bit more respect, but also revising our assumptions about what is and is not important in early learning. We may be able to admit that ‘rapt staring” can be just as important as having fun.

Get new blog posts straight to your inbox

Dr Cary Bazalgette worked at the British Film Institute from 1979 to 2007, after teaching English and filmmaking in London secondary schools. She has written and edited several classroom resources for media education and has published and spoken on this topic across the UK and around the world. ... more